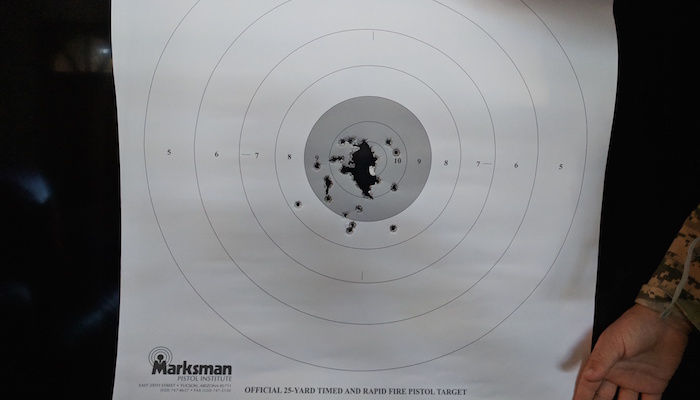 Pain or damage don’t end the world. Or despair or fucking beatings. The world ends when you’re dead. Until then, you got more punishment in store. Stand it like a man…and give some back. ~ the character Al Swearengen from “Deadwood”

I received quite a few emails in response to last week’s blog about giving, including a short note sent in jest that went something along the lines of

You work for a manufacturing company and take yoga classes – wtf?

Suffice it to say, now I know why Stringer Bell (from the “Wire”) kept his economics classes under wraps. I’ll discuss my foray into yoga in a future post, but for now, in an effort to regain some street cred, let me just say it helps me at the range (see photo at top).

One of the emails I received addressed the following (from the blog):

We recently lost a large contract to an Ohio company for parts we’ve been making for many years. An employee of mine asked me if I was angry. Although I was certainly disappointed, instead of being upset about the work we just lost, we should be grateful for the work that company has given us over the years.

How do you maintain a positive attitude in the face of losing work if your customer isn’t being ethical?

I’ve wrestled with this myself and here are three principles I stand behind.

The truth of suffering

As explained by a Buddhist friend of mine (h/t GH), one of the four noble truths taught by Buddha was the truth of suffering which, among other things, reminds us that when we encounter good things, they go bad and that when we encounter bad things, they are temporary and will turn good. Not only does thinking about suffering as a permanent state help prepare you for those moments when things go awry, but it also serves as a constant reminder to “be fucking grateful for those momentary lapses of bliss.” (Hard not to love a monk who throws down the F-bomb.)

The good news of responsibility

Tony Robinson, a minister, speaker and author reminded me of the following passage by Ezekiel (18:2):

What mean ye, that ye use this proverb concerning the land of Israel, saying, The fathers have eaten sour grapes, and the children’s teeth are set on edge?

While it’s true that the conduct of others matters, it’s also true that you can do something about it. And the best part is that “giving some back” doesn’t have to mean becoming something you’re not or “lawyering up.”

As noted by Robinson:

Each of us has choices to make, freedom to live into. There’s good news there. The good news of responsibility. We aren’t determined by the actions or inactions of others. And we can’t use them as an excuse. We aren’t even determined by, or in bondage to, our own past failures.

When describing someone who had never been tested by hardship, the Stoic philosopher Seneca said:

The process is never fun but what I have learned time and time again is that when trying to steward our company through very difficult situations, as long as I keep the mission and values of our organization in mind, we’ve improved as a company and I’ve improved as a person.

On that note, this is a good place to stop and add a song to our Manufacturing Peace of Mind™ Spotify playlist. I was a huge fan of the HBO series “Deadwood” which featured the quote that heads today’s blog. All the characters in the series are really well done but Al Swearengen (played by English actor Ian McShane) was absolutely poetic in his ability to string together profanities.

I was a little disappointed in the ending due to the lack of closure and heartened to learn that HBO finally approved a full-length movie to tie off loose ends (The Ringer). In a nod to the #MeToo movement, interesting to note that an “intimacy coordinator” will be on set to help make the filming of sex scenes safe for those involved (Rolling Stone). Of course, if that doesn’t work, I suppose they could simply try leaving those scenes out.

In addition to great cinema, “Deadwood” also featured some awesome music so, in light of today’s blog, I thought it appropriate to add a song from the series. Here then, is Madeleine Peyroux by way of the song “A Prayer,” which was originally featured in her 1996 album Dreamland. Hope you like it.

If you made it this far, thanks for reading.