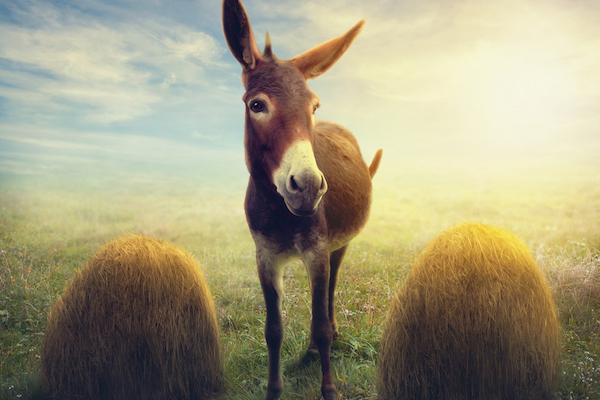 If you eliminate the impossible, whatever remains, however improbable, must be the truth. ~ Sherlock Holmes

Recent matters at work reminded me of a paradox named after Jean Buridan, a 14th century French priest and philosopher who believed that in the face of two equally good alternatives, a human could not make a rational choice:

Should two courses be judged equal, then the will cannot break the deadlock, all it can do is to suspend judgement until the circumstances change, and the right course of action is clear. Jean Buridan, c. 1340 (source)

The paradox become known as “Buridan’s Ass” after Buridan’s views were satirized by writers who imagined a scenario of a donkey finding itself exactly in the middle of two equally proportioned bales of hay unable to decide which bale to eat. Alas, as the story goes, without an obvious reason to choose one bale over the other, the donkey remains in the middle, starves, and dies.

This story has served as an engaging starting point for many philosophical discussions (as noted by Tim Harding of The Logical Place) about the notion of free will and apparently, whether it even constitutes a paradox. Nevertheless, I usually find myself thinking about it when things at Evaero come to a screeching halt as a result of someone outside our company taking forever to make a decision. If you’ve spent any time working in a small business, you know how much the uncertainty associated with decisions like orders, customer requirements, or regulations can impact the organization; especially when, like Evaero, it runs on razor thin margins.

Of course, there will be times when decisions do not have to be made or when one has the luxury to take time for lengthy discussions, meetings, or presentations to arrive at said decisions. However, when faced with a problem such as the one illustrated by the paradox of Buridan’s ass, lest you or your business partners starve, a decision must be made.

This begs the question: How does one go about making a decision in a timely manner when faced with seemingly equal possibilities?

As for me, I reflect on the fundamental principles that guide our organization, its mission, values, and quality statement, while simplifying the problem as quickly as possible. How simple? As someone once said*, “Everything should be made as simple as possible, but not simpler.”

Which, by the way, brings to mind a principle named after another 14th century theologian and philosopher, Franciscan friar William of Ockham: Occam’s (or Ockham’s) razor:

Entities are not to be multiplied without necessity (wikipedia).

I was introduced to the principle while in graduate school discussing two competing theories that seemingly made the exact same prediction. In turn, while citing Occam’s razor, I was advised to select the simpler one (since it would allow me to graduate).

Over the years, Occam’s razor has been restated in ways that subtly belies its original intent. Today’s version, which can best be summarized as “keep it simple,” frankly, has more utility to business than the original. This is because, by shaving away all the bullshit and focusing on the foundational concepts of your business, more often than not, you’ll find yourself making better decisions.

A good place to stop and add some music to our Spotify playlist.

Given our discussion about Buridan’s Ass I thought I’d leave you with Devo’s song “Freedom of Choice” which features the lyrics:

Off of their breakthrough iconic album of the same name, the song tells a story about people who want to be told what to do despite having free will, which, as you now know, is a story that doesn’t have a happy ending.

Until next week, here’s to not becoming an ass.

*As noted by Gibbs and Hiroshi this quote is often attributed to to “the master of one liners,” Einstein, but as investigated by the awesome quote investigator Garson O’Toole, it ain’t so.