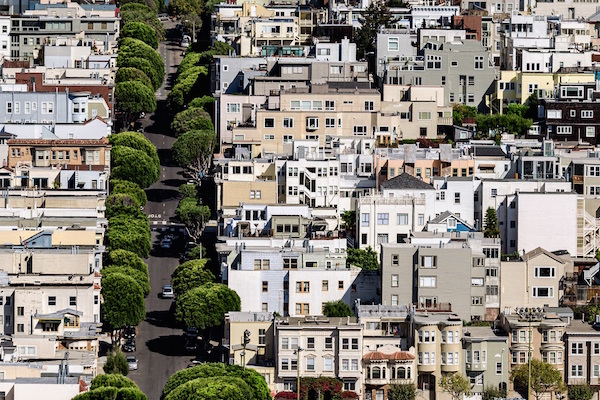 There is science, logic, reason; there is thought verified by experience. And then there is California. ~ Edward Abbey

Last year, we discussed that  “building less housing (in LA) than people demand drives high housing costs.” (LOA) If that is the case, what may be hindering the market from satisfying California’s demand for housing?

First, let me dispel any notion that the supply of homes is being constrained by a lack of developable space. As noted in a new report by the McKinsey Global Institute:

California could add more than five million new housing units in “housing hot spots” – which is more than enough to close the state’s housing gap. In aggregate, there is capacity to build as many as 225,000 housing units on vacant urban land that is already zoned for multifamily housing; 1.2 million to three million units within a half mile of major transit hubs; nearly 800,000 units by allowing homeowners to add units to their homes; nearly one million units on land zoned for multifamily development but underutilized; and more than 600,000 affordable single-family units on “adjacent” land currently dedicated to non-residential uses.

With ample space available for development and California currently losing $140 billion per year in output due to a housing shortage (McKinsey Global Institute) what are some of the factors holding the market back?

Land-use approvals for housing in California take six months on average for simple projects and more than three years on average for complex projects. (as noted in the McKinsey report)

Here are some (alarming) stats from the report:

The primary reason the approval process takes so long is because the California Environmental Quality Act (CEQA), which can include as many as 18 subject areas, applies to housing projects.

Now, the CEQA serves the noble purpose of protecting the environment. However, since all it takes is a CEQA lawsuit to stop a project, it has become the perfect vehicle for those wanting to stop a new project from coming online in their backyard.

Sadly, once a project is approved the pain doesn’t stop since a builder now has to navigate a complex and lengthy permitting process that can take an astounding nine months to complete.

In a recent report by the California legislature’s nonpartisan fiscal and policy advisor (LOA), it’s apparent that local growth controls are capping the number of new homes that may be built in a given year or limiting building heights and densities. Not only are these controls limiting the supply of new housing, but they are also indirectly causing home prices to increase. Citing a study of growth controls enacted by California cities, the LOA report notes that “each additional growth control policy a community added was associated with a three to five percent increase in home prices.”

Many of the assumptions about Proposition 13, the decision by California’s voters in June 1978 to limit property taxes, are not supported by data. (As noted in the LOA’s report titled Common Claims About Proposition 13) Data do however support the claim that Proposition 13 is hindering the market from delivering affordable housing to California residents.

For example, because the cost of holding onto land is now lower than it would be without Proposition 13 the chance that land will be developed drops significantly the longer a property is owned. The LOA report documents this (see Figure 20 in the report) by showing that:

Another way that Proposition 13 has indirectly impacted the availability of land for housing is that cities and counties are now incentivized to favor commercial developments over residential developments because they yield greater tax revenue than comparable housing developments.

Finally, Proposition 13 also indirectly increases housing costs because, as governments adjusted to reduced property tax revenues, development impact fees were looked to to help make up for the shortfall. Indeed, from the LOA report we learn that California’s impact fees, which are the highest in the USA, can contribute a staggering 15 percent to the cost of a new home.

In summary, it appears that a combination of government regulations and a “not in my backyard” ethos is holding the market back from responding to a demand for housing. The McKinsey report mentioned above offers up a blueprint to help close the housing gap, something the authors believe is critical for “improving social equality, enhancing quality of life, and boosting regional economic competitiveness,” but I’m not terribly optimistic the government or residents (who already own homes) will be motivated to change anything any time soon.

So, for those of you living in LA trying to figure out how to make things work, take heart knowing that the LA music scene never stops creating new ways to soothe harried souls. Here (and below) for example is the talented band Forebear and their song “Cusp.” The song doesn’t appear to be on Spotify – if and when it’s listed I’ll be sure to add to our Manufacturing Peace of Mind™ playlist.