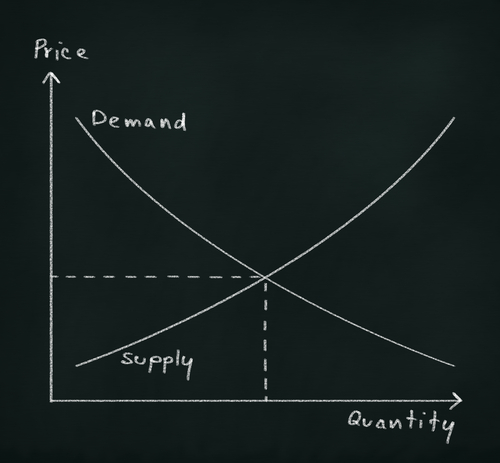 The “reverse auction” is often used in the aerospace market to drive lower prices and, as a practice, Evaero does not participate outside of placing a single rational bid . In hopes that it may help someone facing a sales decision that could compromised their mission I’d like to share my thoughts on the topic.

The above graphic is a generic representation for how price is determined by the interactions between buyers and sellers. The demand curve describes how much of an item people are willing to buy at a particular price. The supply curve describes how much a seller will supply at a particular price. The  “equilibrium price” is at the intersection  – where demand equals supply.

This graph is fundamental to understanding the invisible hand that guides pricing. The price of the titanium I buy to make a complex precision CNC machined aerospace part, for example, is described by a graph that looks just like this. If the price of titanium is low, only the cheapest producers can profitably supply titanium to the market and, because of the low price, titanium will find its way into designs of lower value goods.

Alternatively, as the price of titanium increases, more producers will jump in and titanium will gradually be directed to only those goods deemed by society to have the highest value.

This is not how reverse auctions work in our industry and it’s a very important distinction.

Based on my observations of reverse auctions and discussions with companies who have participated in them,I have come to these conclusions:

These auctions remind me of a trip I took along the Jornada del Muerto Trail that ultimately ended in a poker game with some folks who worked on Ted Turner’s Armendaris Ranch. 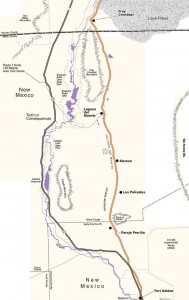 Having ridden a horse to the top of the Fray Cristóbal Mountains that separates the trail from the Rio Grande it’s easy to understand why the Conquistadors referred to it as the “route of death.”  Indeed, to this day I’ve never seen a vaster expanse of parched nothingness than the 100-mile long valley that cradles the trail between the San Andres Mountains on the east and the Fray Cristóbal Mountains and Caballo Mountains on the west. (click on the map for an enlarged view.)

I’ve always loved the desert though for the subtle way it offers up lessons to those who take the opportunity to wander in its solitude. Jesus made it 40 days. I only made it one night.

It was a late night of Texas Hold’em and although the details are a little hazy I can remember hearing a whisper from a former bear biologist turned ranch manager when the so called “river card” turned up to be an ace:

The price of poker just went up.

Looking into the eyes of the whisperer I saw a glaring expanse that reflected the wisdom gained by years spent in the Jornada del Muerto. It was in that moment, in my own shimmering solitude, that I was given the opportunity to realize one thing: I was fucked.

For you see, in poker, fortunes are most often lost when there are two people left at the table each presumed to have a good hand.

While it’s clear why people play poker and make many of the decisions they do, I cannot say the same for someone participating in a reverse auction such as the one I’ve described above. Looking to Nobel Laureate Herbert Simon’s model of bounded rationality for answers, it is clear that constraints such as time, cognitive limits, and information play a role.

They are likely at work when a buyer decides to use a reverse auction and when a seller decides on prices before the start of an auction.  What I don’t believe the model explains is why the auctions often end the way they do, with someone agreeing to sell goods for much less than planned.

Although in business nothing is ever certain and we often find ourselves participating in things we don’t fully understand. Reverse auctions seem to be the digital equivalent of the Jornada del Muerto. More importantly, as noted to a customer in an email when I declined to participate in a recent auction, they simply don’t serve our mission:

Our entire business, from the explicit mission of our organization and the systems we have in place to support that mission, is wrapped around getting parts to our customers when they need them. We do not participate in auctions because, in a nod to John Maynard Keynes, we have found that this construct makes it too easy for ‘animal spirits’ to take over and push aside our mission and ultimately what is best for our customers and in turn their customers.

In choosing to not participate in reverse auctions (other than placing an initial rational bid) it is true we have lost opportunities. However, as sure as a flush always beats three of a kind, there is no surer way to erode the long term viability of your organization than to compromise your mission for the sake of a sale.

Although I’ve got a bunch of music to share with you, today it seems appropriate to leave you with a clip of Herbert Simon talking about the limits of rationality.  Before ending though I wanted to report that the recommended St. Paul and the Broken Bones Valentines Day show at the Fillmore was in fact epic.

So yeah.  I can sing.  What I can’t do is sing so well, with so much vocal power and physical presence, that I transform The Fillmore into a soul-powered pressure cooker, driving a deliriously appreciative crowd utterly, utterly bonkers.