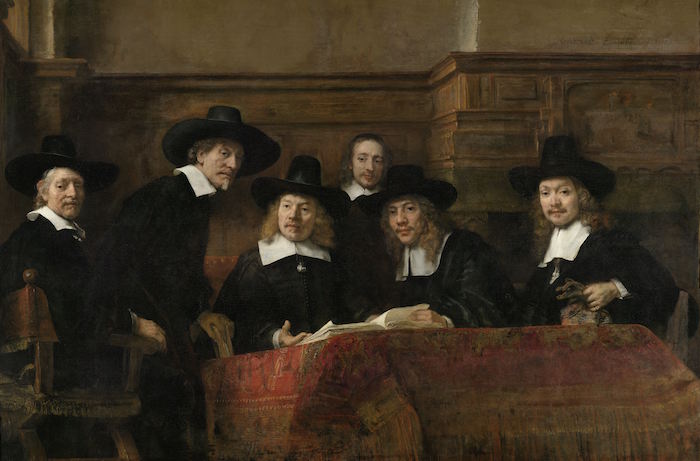 I recently visited a friend who is a scientist at the Rijksmuseum and had the opportunity to see Rembrandt’s 1662 painting De Stallmeesters (aka Syndics of the Draper’s Guild). It’s one of my favorite paintings because of the way Rembrandt manages to take something as banal as a meeting and turn it into something worth looking at hundreds of years later.

One of the things I learned on my visit was that as a result of x-ray imaging we now better understand the degree of effort Rembrandt worked to arrive at the final composition. For example, the servant (the guy without the hat) was drawn in three other locations before finally being placed in the middle of the painting.

As I contemplated the secret lives of paintings, I couldn’t help but think about the secret lives of decisions. Much like Rembrandt’s painting, behind most decisions is a myriad of details that are often only known to the presenter. Perhaps in contrast to a work of art though I think decisions are often better delivered to critics in the context of these details; information such as: the problem a decision attempts to solve, the data that were considered while making a decision, and how those data were interpreted by the presenter.

As some of you may know, HP recently split into two business units: Hewlett Packard Enterprise and HP Inc. HP Inc. kept the existing logo leaving the newly formed enterprise platform to develop their own brand. On April 15, 2015 CEO Meg Whitman introduced the new brand (see here) but not without first providing some context:

Regardless of what one thinks of the logo (a Rembrandt it isn’t), we can learn from the manner in which Whitman presents the details behind the decision. It might not spare her from criticism or disagreement, but by presenting what she considered in arriving at her decision, we understand where she’s coming from and can better engage in the conversation.

On too many occasions I have learned the hard way that regardless of how small the decision may seem, if it affects others and you have the time to do so, it’s worth explaining the effort you invested to arrive at your final composition. Indeed, just because you took the time to explain all the intricacies that were involved in making momentous decisions doesn’t mean you’ll get a ‘pass’ on the small stuff.

On that note, before checking out for the week, I wanted to leave you with a clip of a BBC interview discussing some of the research mentioned above.