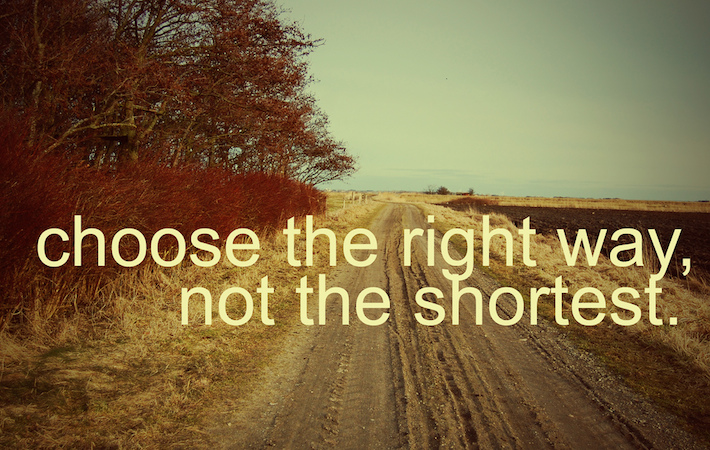 Another take on the first value: Do the right thing.

To thine own self be true, and it must follow, as the night the day, thou canst not be false to any man.  — Shakespeare

Harvin Moore was a partner in a Houston law firm before founding a business that, at its peak, was valued at 250 million dollars. As a result of an economic downturn, the business rapidly crumbled and during this time, under immense pressure, Harvin would come to an ethical fork in the road that would ultimately take him to Federal Prison in El Paso.

I recently had the opportunity to talk with Harvin about doing the right thing. He’s not the type of man you would ever expect to take that wrong turn. In fact, I could imagine chatting with him under a porch on a hot Texas day with a glass of iced tea in one hand and a notebook in the other.

As noted by ethicist Michael Josephson, on a practical level there are two vital steps to ethical behavior: Knowing what is right and then doing it. Because peoples’ lives depend on the systems that Evaero supports it is absolutely critical that everyone at Evaero knows what is right and does what is right all the time.

Although I go to great lengths to remind everyone in our company of this, I realize that as the leader of our organization, the ethical fiber of our organization ultimately begins and ends with me. As such, my conduct at work must reflect my core values at all times without exception.

According to Michael Josephson, the four enemies of integrity are:

I have found these enemies are always present and continually work in concert with a long list of pressures, temptations, and rationalizations to constantly test the strength of my core values and, in turn, my conduct.

How to win the test and do the right thing?

Some things I have found helpful:

Reflecting on my own moral lapses, having spent my own time in the desert, I believe it is in that silence where the real work begins.  As we all know though, the work is never done. Around every corner, there is another Rosa’s Cantina, another Felina. The fact is, as noted by Harvin Moore, pressures and temptations will always be present but it’s up to us to decide whether they will dictate our choices. Making the right choices is a lot of work but by being true to myself and remembering who I serve doing the right thing gets easier every day. After his time in the desert, Harvin Moore found redemption and I hope one day to be able to say the same.