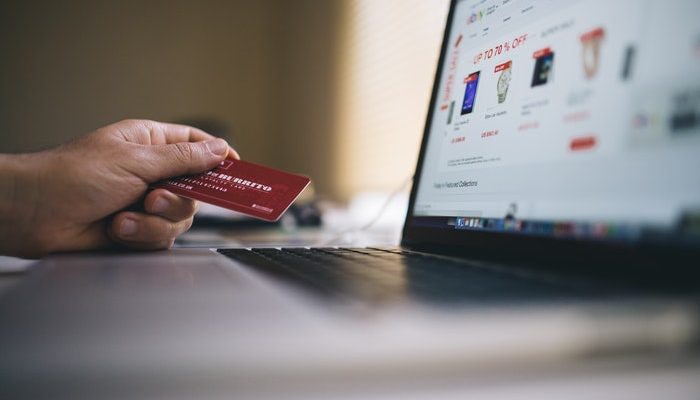 Continuing a thread we started last week about macroeconomic indicators, today I’d like to introduce you to the Vistage CEO Confidence Index. The index, which has been around since 2003, reflects the sentiment of hundreds of CEOs of small to midsize businesses who, in surveys, are asked questions about the state of the economy and the prospects for revenues, profitability, capital investments, and hiring.

Although you can get summary reports here, I head to an interactive site that not only breaks down the elements of the index (by question, which I’m more interested in) but also lets me look at the data on a monthly basis.

What am I looking for?

In addition to putting my own observations into a larger context, I’m looking for signs of abrupt changes in what businesses are planning to do with their money. Specifically, I’m looking at answers to the following survey question over time:

Are your firm’s total fixed investment expenditures likely to increase, remain about the same, or decrease during the next 12 months?

There are a number of reasons to track the responses of small business leaders to this particular question over other questions in the survey.

Second, when you ask small business leaders about investments, their responses will tend to be more rational and measured than responses to questions about, say, the economy. Indeed, ask me whether I’m going to buy a new CNC machine and my answer is unlikely to change much from month to month since the decision will be based on a large number of logical inputs (e.g., capacity constraints, cash on hand, tax incentives, etc.) and expected outputs (e.g., improved productivity, customer satisfaction, added capabilities, etc.). Ask me whether economic conditions are going to be better over the next 12 months and you might as well be asking me about the weather since my answers are just as likely to be influenced by random, meaningless pieces of information (e.g., are the President and Kanye West really friends?) as they are about relevant observations (e.g., price increases due to tariffs).

During the next 12 months, do you expect the overall economic conditions in the U.S. will be better, about the same, or worse than now? 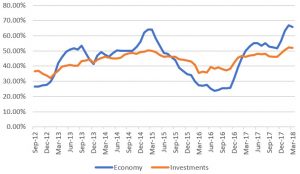 What’s immediately apparent from the graph is that the question about investments generates responses that are significantly less volatile than those about the economy. Consider for example, that despite the big slump in expectations that occurred from March of 2015 until Trump won the election in 2016, business plans about investments didn’t change a whole lot. That’s because, despite everyone’s ruminations about the economy, fundamentals during that period were sound and didn’t give anyone cause to change their investment plans.

Take a look however at what happened in the lead up to the “great recession” which officially began in December of 2007. Two quarters before the wheels came off the economy, from the June 2007 report we learned:

Executive outlook in Q2 emphasizes the general confidence in the U.S. economy that we’ve seen in the last year…Although CEO’s remain cautious about their prediction, they are planning for growth and expansion…Almost half of all U.S. firms plan to increase investments in plants and equipment in Q2. (via BusinessWire)

Just one quarter later, from the September 2007 report we learn:

Of the 2,103 business leaders surveyed, the concern is not only about the economy, but also about the availability and cost of credit to their companies…Because of this, executives plan to put some of their planned investment on hold for the remainder of the year. (via BusinessWire)

That business leaders suddenly altered investment plans from one quarter to the next was a clear indication something was amiss in the economy and exactly the kind of shift I’m looking for when reviewing these data.

I would certainly encourage you to review all the data put out in the Vistage survey. However, with small business owners keenly aware of how investments can impact working capital and the bottom line, sudden changes to plans in this regard can be an excellent leading indicator to where the economy is heading.

On that note, a great time to check out for the week. Before I do, how about some music for our Spotify playlist? Seems an appropriate time to introduce the song “I’ll Fly Away” by Kayne West – the Kayne West song that you put on when your grandmother comes over for a visit. The song is in fact, a variation on a song of the same name written by Albert Edward Brumley that is thought to be the most recorded gospel song of all time (Trial & Error Collective). In addition to West’s version I’ll also add my favorite rendition by Gillian Welch and Alison Krauss – hope you like them both.