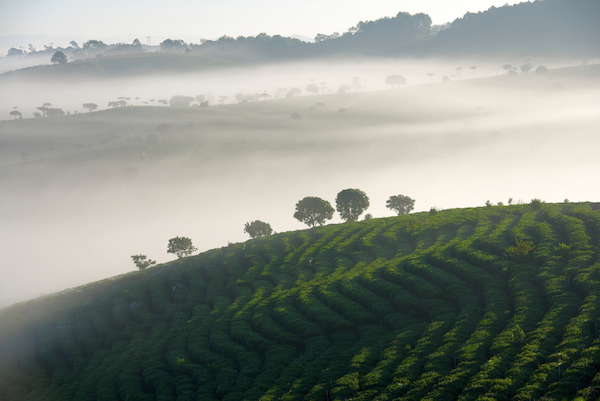 Earlier this year I wrote about the teas I drink during the workweek, my so called “daily drinker teas.” When weekends and holidays roll around, however, I set those teas aside in favor of some nicer fare like Chinese Pu’er tea.

I recently chatted with Zhuping, a Chinese tea scholar from Tucson’s own Seven Cups Fine Chinese Teas on the topic of Pu’er and I thought it would be valuable to put together a brief guide for those who have an interest. 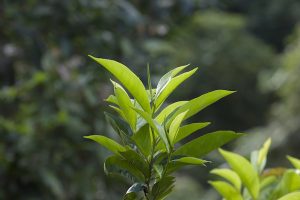 First of all, “Pu’er” is a place, not a tea varietal. A city in the tea growing region of Yunnan province, Pu’er just happens to be the place where growers of assamica (pictured here), a broad leaf varietal of camellia sinensis, have traditionally brought their tea to be made, packaged and sold. In this way, you can think of Pu’er much as you would wine growing regions like Napa and Bordeaux, that have become synonymous with particular grape varietals and styles of wines.

Secondly, although there are two main types of Pu’er teas (Sheng/Shu), all Pu’er teas go through a process of withering, oxidizing, rolling, drying, and fermenting. 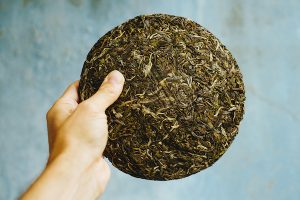 After the tea leaves are dried, the mao cha is steamed and compressed into cakes (pictured to the left), dried, and readied for sale by wrapping in paper. Having only been lightly oxidized during the frying process, the wrapped tea still contains enzymes which will allow it to ferment and change over time.

Young Sheng teas have a bright, astringent character that, much like wine, “soften” with age. When I first tried Sheng Pu’er tea in China I found it to be too bitter to my liking. However, according to Zhuping, this is characteristic of many commercial grades of Sheng tea which tend to come from young tea plants. If, as I can now attest, you find tea made from older plants, the tea isn’t bitter and has an almost floral character. It’s also worth noting that in traditional Chinese medicine, Sheng teas are believed to help with inflammation and respiratory ailments such as colds. Given that I’m on a very early flight to Oakland at the moment, I’m probably going to need some Sheng power on my return to Tucson.

Unlike Sheng tea, which naturally ferments over time, Shu tea is fermented under the supervision of a tea master in a controlled environment over the course of 60 to 90 days before being pressed into cakes. Shu teas have an earthy/tobacco characteristic that smooths out with age (much as the Sheng teas do); further, according to Zhuping, Shu teas are believed to help with circulation and digestion. (Probably should also throw some Shu tea in for good measure after this flight is over.)

The difference between the two types of Pu’er teas cannot be understated and really requires tasting to appreciate. Drawing on our wine analogy one last time, one might think of Shu teas as a Pinotage and Sheng teas as a Riesling.

Regardless of what type of Chinese tea you like, I can definitely recommend Seven Cups as a source. In addition to sourcing quality teas, the folks who work there are all very friendly and knowledgeable. Zhuping has been especially helpful over the years and has been kind enough to indulge my efforts to say a few words in Chinese to her every time I stop in for tea. And to those of you looking for an introduction to Chinese teas or a fantastic gift idea, they also have some truly wonderful sampler packs.

In a nod to today’s topic, I wanted to introduce you to Wu Wei, someone who has been at the forefront of the Chinese punk music scene since forming the band SMZB in 1996 with Zhu Ning. Suffice it to say, being a punk musician in China has certainly not been without its challenges for, as noted in The Guardian, the band has had to deal with tapped phone lines, curtailed music sets, and being banned from music festivals for being so called “trouble-makers.” According to the same article, in addition to still being active with his band,  Wei owns a “scruffy” bar in Wuhan named Wuhan Prison that I’ll be sure to check out if I ever find myself in the area.

The SMZB song I’m adding to our Spotify playlist is named “Scream for Life.” Although the video is a little rough, it does a great job of capturing the energy of the music and the Chinese youth in the audience. Music truly is a universal language and as evidenced by the Guardian article I’m so glad that Wu Wei and SMZB is being recognized for introducing punk music to China.

Cheers and, to those of you looking forward to December 15th, may the force be with you…xian