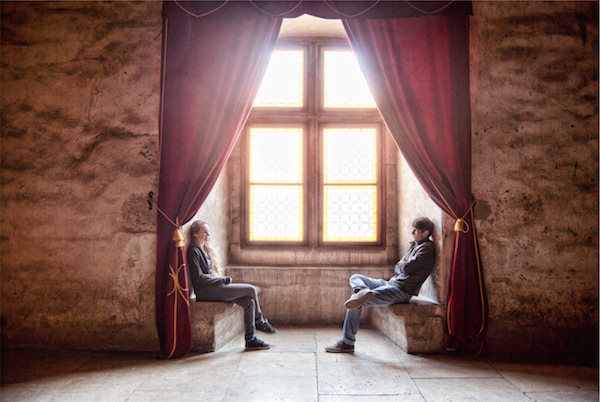 Even in our sleep, pain which cannot forget falls drop by drop upon the heart until, in our own despair, against our will, comes wisdom through the awful grace of God. ~ Aeschylus

As previously mentioned, I use “smile therapy” as a drill to overcome my introversion and, in turn, become better at my job as Evaero’s CEO.

Having performed this drill for a number of years I felt, in the right situations, I was ready to advance my practice and engage in conversations with…gasp…strangers. Now, this won’t seem like a big deal for those of you who are socially inclined but, much in the way I imagine some people feel about public speaking, striking up a conversation with someone I didn’t know used to be a gut wrenching affair.

If this sounds like you, I encourage you to work on the smile first because it will provide you with the positive reinforcement to progress to the next step. I first made this connection by spending time with my extroverted friend Barry, a guy who always has a smile on his face. And by the way, it’s not one of those weird clown smiles either (be wary of people with weird clown smiles). Instead, it’s an honest, filled with joy, welcome you home kind of smile that inspires the same in whomever he meets and easily invites conversation.

Armed with a smile, I practiced during situations with “built in” endpoints, such as while waiting in a line, picking up a to-go order, during an Uber drive, or while settling in for a flight. Having done this for awhile now, I can speak to the benefits. Not only has this practice helped me in my role at Evaero by allowing me to more easily connect with my staff and customers, but it has also enriched my life.

On a recent flight from Portland I found myself wired on espresso (what is it about the coffee in Portland?) and sitting next to a woman and her mom on their way to celebrate the mom’s 60th birthday in Vegas with a second daughter who was flying in from Chicago for the occasion. As I settled in, I couldn’t help but notice (thanks to the whole Esme Patterson thing) and subsequently comment on the daughter’s tattoo which I learned commemorated the passing away of her father two years earlier.

While talking to the mom about her deceased husband and the up and coming birthday celebration it was hard not to be struck by how the sadness for the loss of her husband was being buffered by the love of her daughters. I asked her for any words of advice from a life well-lived with kids: no matter what was going on with her daughters, she always focused on the positives. In doing so, she felt, as a matter of course, both her daughters grew into that positive image she had of them.

Given how easy it is to focus on the negatives and be critical, I found this to be sound advice and I’ve in fact been practicing it ever since with my own son.

Thinking about the grief the mom must have felt in losing her husband, I couldn’t help but be reminded of a poem by the Greek tragedian Aeschylus. Before the flight came to an end, I jotted down what I could remember and fashioned it into a birthday card of sorts. On my way off the plane, I passed it to the daughter thinking her mom would find solace from the words and hoping her daughter would deem it appropriate as a gift.

I never learned if the card made it to the mom or not, but the recent events in Charlottesville have brought all this back to mind. The poem was invoked by Robert Kennedy during a speech he gave on the eve of MLK’s assassination. Along with the poem Kennedy noted that:

And asked us to:

Dedicate ourselves to what the Greeks wrote so many years ago: to tame the savageness of man and make gentle the life of this world.

As we reflect on the events of Charlottesville and put them into historical context, I hope more of us will dedicate ourselves to just that. And with that, here is the entirety of Robert Kennedy’s speech.