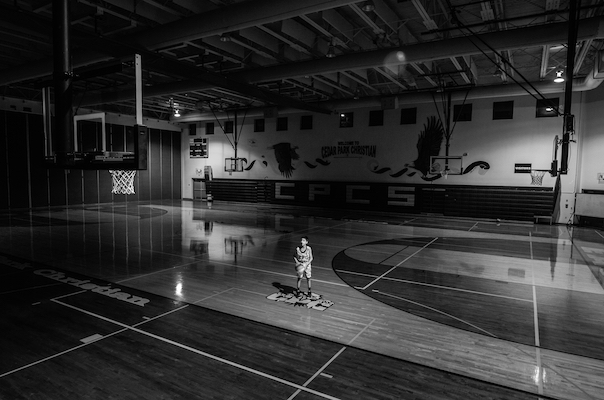 If you’ve spent any time watching basketball you know the best free throw shooters are methodical about their pre-shot rituals. By reminding players of proper shot mechanics and inspiring a state of confidence, relaxation, and intense focus, pre-shot rituals lead to higher free throw percentages*.

In the same manner the pre-shot ritual helps basketball players make successful free throws, I believe having a pre-work routine can help individuals have a more focused and productive day not only at work but also at home. Life beating you down? Feeling overwhelmed trying to balance responsibilities at home and work? Neglecting to take care of yourself? Before accepting that this is the way life has to be, consider developing a morning routine to help get you centered and primed for the day.

Inspired by my father who has his own regime I have had a morning routine I’ve followed for decades now. Although I’ve made some adjustments over the years, what I want to share with you today are the three foundational elements that have served as the core of my routine for a long time.

Since my time in military school, the very first thing I do in the morning is make my bed. Although an incredibly simple task, there is something about the morning ritual of making my bed that serves as a great starting point to my day.

Don’t believe that something as simple as making your bed can make a difference? Consider what Adm. William H. McRaven had to say about it:

You need an anchor point for your day, and sometimes that anchor is as a simple as making your bed…It will give you a small sense of pride, and it will encourage you to do another task and another. (source)

McRaven would talk about this during his 2014 UT Austin commencement address and later in a book titled “Make Your Bed: Little Things That Can Change your Life…and Maybe the World” (h/t NYTimes).

After my bed is made, I express gratitude, gratitude for having been given another day and for all of my blessings in my life: a family I love, a job to go to, and things to look forward to.

Regardless of your faith (or absence thereof) or what life is throwing at you, if you’ve lost your game, consider starting your day by giving thanks. As noted by Melody Beattie, a survivor of abandonment, kidnapping, sexual abuse, drug and alcohol addiction, divorce, and the death of a child:

Gratitude unlocks the fullness of life. It turns what we have into enough, and more.

I cannot tell you how much of a difference starting my day like this has made for me. It erases what may have been a crappy day before and has me looking forward to the day ahead.

Do calisthenics and a breathing exercise

I inherited this practice from my father who, after having his morning coffee, does a series of body weight exercises punctuated by what can best be described as rapid-fire-breathing between exercise sets. The combination of caffeine, calisthenics, and breathing not only primes him for the day ahead but I can tell you that, even at 80 years of age, my father is in better shape than most 40 year olds.

More often than not my morning calisthenics consists mostly of “active stretching,” however, if I know my day isn’t going to allow for something more substantial, The Scientific 7 Minute Workout is my no-excuses go-to workout; especially when I’m on the road. The routine requires no equipment, can be done anywhere, and is long enough to get your heart rate up (but not so long that you’re drenched in sweat when you’re done). Combine it with a jump rope session and you’ve got yourself one heck of a workout.

Regarding the breathing, I’m a big fan of Andrew Weil’s 4-7-8 breathing technique. So that you don’t have to search the web for it, I’ve left you a video of Tucson’s own Dr. Weil describing his technique below.

Having tried various morning exercise routines over the years I don’t think the specifics are all too important. The goal here is simply to wake your body and mind from slumber and get primed to start the day. For those of you who want for a more carnal routine…just remember to make your bed when you’re done.

Since starting this thread a few weeks ago (with Being Busy Isn’t a Good Answer to “How are you?”), quite a few of you have shared your thoughts about the unnecessary state of busyness in the world and have filled me in on some of your morning routines.

Since it was particularly insightful, I wanted to share part of an email I received from a reader** who recently decided to leave corporate life to strike out on his own:

I had to establish a discipline and an awareness. As Socrates said, ‘The only true wisdom is in knowing you know nothing.’

I had to hit the reset button on my corporate routine and establish a small business owner routine.

Here is how I did it: Again, back to the military for inspiration. The Navy Seals believe a man must live by a code, an Ethos. So, I created an Ethos to recite to myself every morning.

I go outside and watch the sunrise… recite the Ethos, followed up with positive reinforcement of how blessed I am to see a new day. Deep breathing techniques from the Navy Seals, called “box breathing” to get the stale breathe out, breathe of life in and focus to deep dive your day ahead. Then begin some light stretches and drinking a full glass of water before having any caffeine.

I have learned that I have a lot to learn but the lessons thus far have made me who I am…as long as I continue to grow and share them with others along my path. (h/t NA**)

On that note, a good time to check out for the week. But first, some music.

My favorite source for classical music is LA’s KUSC. They play music I like, their staff are incredibly knowledgeable and, because they don’t play the news in the morning, I have found it to be the perfect station to listen to while I’m working on this blog in the wee hours of the morning.

Perhaps because of the fact that the station is based in LA, KUSC does an excellent job of featuring composers who produce music for movies and TV shows. As a result, I’ve become keenly aware of how the film industry has become an incredible source of creative inspiration for all types of musicians.

Through my friend Barry (who I introduced you to in an earlier blog), I was introduced to the music of Martin Tillman. A cellist, in addition to performing with artists like Beck, Tracy Chapman, and Better than Ezra, Tillman has worked with icons like Hans Zimmer on a number of motion picture soundtracks.

In checking out his new work Superhuman and comparing it to his 2004 release, A Year in Zurich, it was fascinating for me to observe how Tillman’s music has been transformed by his time in LA working in the movie business. So that you can enjoy his old and new music I’ll be sure to add a track from each album to our Spotify playlist.

*See, for example, an article by Gayton, Cielinski, Francis-Keniston, and Hearns titled “Effects of pre-shot routine on free-throw shooting.”

**In keeping with protocol I established years ago to maintain the anonymity of the people who send me private communications via email, if I share content that comes to me from a reader’s email, I limit my citation to the author’s initials.